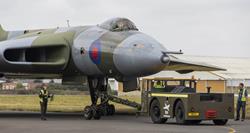 The Trust organises four Visit the Vulcan Days each year where the public can see the former Royal Air Force jet bomber close-up and even climb into the cockpit. Other events, including concerts and hangar dances all help raise funds for the upkeep of the historic Vulcan aircraft.

Staffed wholly by volunteers, the Trust is a registered charity and receives support from its membership scheme, donations and events income. XL426 is one of only three Vulcans left in the world that still has its engines run regularly and which is capable of moving under its own power, although sadly it can no longer fly.

The Trust maintains XL426 as part of Britain’s aviation heritage and as a tribute to the men and women who flew and maintained the Vulcan during the Cold War.