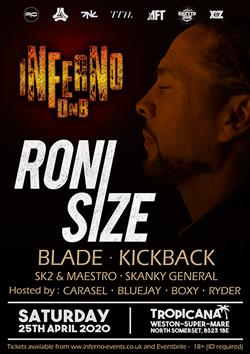 We are a Drum & Bass event organisation based in the South-West of the UK. Founded by ex-GBH and former Pawlett Manor resident DJ's SK2 (formerly Skitz) & Maestro, we held our first ever Inferno event in 2006 at Flaming Jae's in Brean and were hailed as a true breath of fresh air by local clubbers. This became an (almost) monthly night and featured some of the very finest up and coming DJ's on the underground circuit alongside a few local heroes and a couple of the scenes biggest names.

In 2007 we put on a few smaller bar nights alongside our main events under the guise of Inferno Sessions but have since knocked these on the head to concentrate on our main events.

Up until its closure in 2010, we were holding events at The Perfect 5th in Taunton and were the first DnB organisation to bring the likes of Danny Byrd, Sigma and Metrik to Taunton.
In 2014 and 2015 we hosted the Drum & Bass stage at Sat In A Field Festival and are about to return to the South-West with a brand new event.