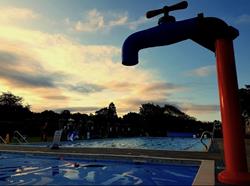 Woodhall Spa is set in the heart of Lincolnshire on the edge of the Lincolnshire Wolds. To one side we have historic Lincoln, being only 20 minutes away, with its Cathedral and Castle which is home to one of only four original copies of the Magna Carta signed by King John. To the other side, we have RAF Coningsby, a mere 10 minutes away, home to the Battle of Britain Memorial Flight (BBMF Visitor Centre) sporting the last remaining flying Lancaster Bomber in the UK, along with a range of Spitfires and Hurricanes and not forgetting the Dakota.