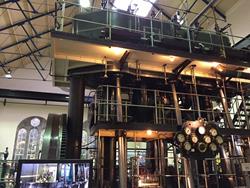 The Museum, a unique and fascinating experience for all the family, is located at Langford, near Maldon, Essex and is easily accessible from the A12 (see ‘Visiting’).
Set in seven acres of grounds with the River Blackwater running through, the main exhibits are housed in the 1920s Steam Pumping Station, the former generator hall and boiler house.
Pride of place is given to the magnificent Lilleshall triple-expansion steam engine which was returned to steam for the first time in 50 years in April 2011. As a result in September 2013 the Museum was awarded “Engineering Heritage Listed Status” by the Institution of Mechanical Engineers. The certificate was awarded by John Wood (Chairman of the Awards Committee) who remarked the the award recognises the contribution that the staff and volunteers have made in preserving part of Britain’s heritage for future generations to enjoy.