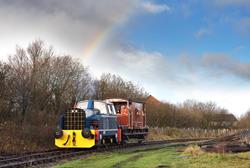 The route of the original railway is recognised as Britain's first operating public railway authorised by the Act of Parliament in 1802 and which began traffic in May 1803 as the Carmarthenshire Tramroad.

The railway opens on selected days throughout the year and offers standard guage train rides over half a mile of running line (to be extended gradually as funds allow). The railway currently owns a variety of rolling stock including diesel locomotives and diesel multiple units. Other organisations such as the Gloucester Railway Carriage and Wagon Museum, the Cab Yard and the London Transport Traction Group are also present at the railway and are playing an active part in the railways future plans, with their assets being incorporated into future attractions.