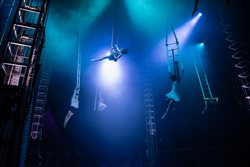 NoFit State was founded in 1986 by five friends. During a politically charged time, in a recession, and as a creative reaction to the world around them, the circus was born.

Thirty years later NoFit State still believes that the total outweighs the sum of the parts. The company lives together, works together, eats together, laughs and cries together – travelling in trucks, trailers and caravans and living and breathing as one community. This is what creates the spirit that is NoFit State and gives the work its heart and soul.

Contemporary circus combines live music, dance, stage design, text, and film with traditional circus skills. It is rooted in the travelling community who turn up, pitch a tent, drum up an audience, and then leave with only flattened grass and a memory to show they were ever there.