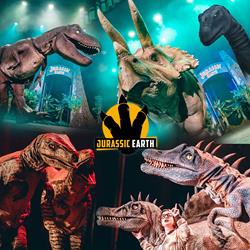 This is an extraordinary 75 minute show featuring REALISTIC, huge, state of the art, roaming Dinosaurs and crazy Rangers!

This is an unmissable opportunity to talk to a Triceratops, roar with a T-Rex, look up to a Brontosaurus, scream with a Spinosaurus and run from a Raptor!

Joined by a zany Professor, an eccentric Doctor and a team of Rangers, our Dinosaurs bring the Jurassic Era to life in this roar-some show. Combining entertainment with education, Jurassic Earth brings these remarkable creatures to your local theatre, thrilling not just for the children in the audience, but the adults too!

AS SEEN ON TV - Our dinosaurs have features on BBC, ITV, Channel 4, Channel 5, MTV and Sky. You may have seen them most recently on Dancing On Ice where our naughty raptor sneaked up on Holly Willoughby and Ashley Banjo!

Jurassic Earth is the ORIGINAL & BEST Live Dinosaur Show – See our REVIEWS for this incredible Theatre Show - This is NOT an imitation!