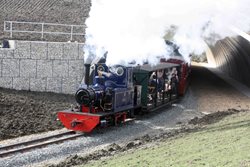 We are Bedfordshire's premier heritage railway attraction, running trains along our three-mile line up to five times a week from March to October, with Santa Specials in December.

The Leighton Buzzard Railway is one of the last survivors of the hundreds of 2-foot (610mm) gauge light railways built in Britain for industrial use. It is believed to be the only remaining line which owes its existence to the ready availability of surplus materials and equipment from the First World War battlefield supply lines.

Opened by Leighton Buzzard Light Railway Ltd in 1919 to transport sand, and uniquely operated since then without a break, it has carried a steam-hauled passenger train service since 1968. It also now houses one of the largest and most important collections of narrow-gauge stock in England. Both the collection and the railway itself are covered by our Accredited Museum designation, awarded by Arts Council England.