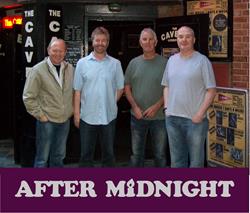 After Midnight were formed in 1985 in Newcastle upon Tyne, taking their name from the JJ Cale song.

For the past 22 years, the band have concentrated on their Eric Clapton tribute concerts, performed at theatres all over the UK, under the name CLASSIC CLAPTON. Highlights have included The Royal Festival Hall and Glastonbury Festival. They have performed numerous concerts in Europe including Spain, Estonia, Holland & France.

In 2009 they appeared at St Andrews Auditorium in Mumbai. They were invited back for 3 more concerts in India in 2016. On the final night of the tour Classic Clapton performed in front of 3500 people in the open air sports arena in Mumbai. In 2017 they appeared in Colombo, Sri Lanka.

In the past 37 years After Midnight have become something of a rock institution. They continue to perform gigs as a 4-piece rock band and also as an acoustic duo "After Midnight unplugged".
www.after-midnight.org.uk